I have been monitoring the moisture content of my timber joists since 18th December 2012, using Hygrotrac wireless sensors that transmit various readings to the internet, and finally we’re seeing the WME (Wood Moisture Equivalent in %) drop to below critical levels. The sensors are located at various points in the crawl space, including several in ‘dead’ spaces where air movement is reduced.

After more than one year of monitoring, it was clear that the air bricks on their own were not capable of drying out the timbers. I had managed to reduce evaporation in the crawl space by laying a heavy gauge DPM sheet on the ground, but this had not reduced the evaporation sufficiently as it was still coming from the crawl space walls. The air bricks themselves were also not enough to permit a decent change of air in the crawl space – on the side of the house facing the main street, there were several air bricks with decent air movement, but towards the rear there were only two, being also located only on one side (since the kitchen had been added in previous years with a solid floor). It was at this point that I had decided to install a SmartVent on 22nd March 2014 (see previous post).

After another year of monitoring, it was clear that the SmartVent was not making a difference to timber moisture levels. It was apparent that too much water was still evaporating from the crawl space walls, and also from two original hearth foundations that the ground sheet had not covered before. A solution that I decided to try out was to reduce the height of the hearths and then continue the DPM over these and up the crawl space walls, attaching it using battens and concrete screws to the crawl space brickwork just below the original damp proof course – this work was completed on 8th September 2015 (see photo below). Since then, wood moisture levels have started dropping dramatically and are well under 20% WME at present. 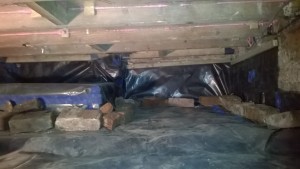